Skip to content
Home ❯ Blog ❯ JSON vs YAML: What’s the Difference, and Which One Is Right for Your Enterprise?

JSON vs YAML: What’s the Difference, and Which One Is Right for Your Enterprise? 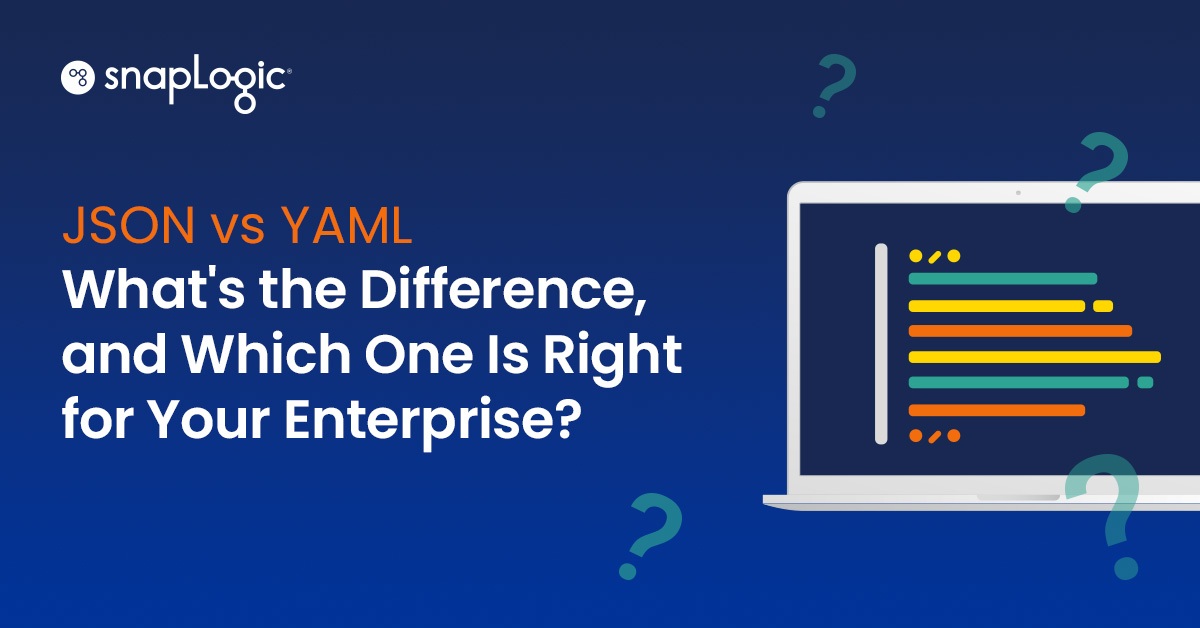 But the JSON vs. YAML (YAML Ain’t Markup Language) debate is a bit more complicated. JSON’s popularity is an advantage, yet YAML may be a better fit depending on a number of factors (like data type and whether you need a format for data storage as well as data transfers).

Which one is best for you will depend on what you’re using it for and who’s using the data serialization format.

It’s a lightweight data-interchange format for data exchange between different systems. Because it’s a text-based format that uses JavaScript syntax, JSON is fairly easy for humans to read and write, but it’s also easy for machines to parse and generate.

This data serialization format was developed around the same time as YAML. It was first developed in 2001 and took off as a lighter format than XML (Extensible Markup Language), which is an older data format used for storing or transferring data.

JSON is widely seen as the industry standard. It continues to be the most widely used format for data transfers. But it doesn’t work for every situation. JSON is primarily used for serializing and transmitting structured data over a network connection, not data in storage.

It’s a secure data format used for handling numbers, strings, objects, and arrays. If you need to handle other types of data (like nested values or timestamps), you’ll need to look to another data format.

YAML is the most human-readable data serialization format. Many developers consider it easier to learn than JSON because it’s written using natural language.

YAML is a superset of JSON. It was developed around the same time to handle more kinds of data and offer a more complex but still readable syntax.

Developers often liken YAML to Python because the syntax is so similar. If your team is already familiar with Python, YAML might be the right fit.

Like JSON, YAML is used for configuration files and applications where data is being transferred. It can also be used for data that’s being stored — it’s a more versatile format than JSON. Additionally, YAML was made to handle a larger variety of data types than JSON. In addition to things like numbers and strings, YAML can handle dates, timestamps, sequences, nested values, null values, and Boolean.

There’s plenty YAML can do that JSON just can’t. But there are also situations where JSON outshines YAML (like in data security), so what’s best for each situation will vary.

JSON vs. YAML: Which Do I Use?

When choosing which data format to use, you’ll need to consider who will be using it and what they’ll be using it for. Your team’s history with syntax and data will play into which format is right for your team. Has the team already learned JavaScript syntax? If so, adopting JSON would be that much easier. But if you need a data format for handling integers, YAML is the way to go.

Learn more about these JSON vs. YAML use cases below so you can pick the best data serialization format for your needs.

JSON is widely regarded as the gold standard in data formats. It may be a good fit for you and your team if you’re looking for a data serialization format that’s:

YAML Is Excellent for Both Data in Motion and at Rest

While JSON has a lot of advantages, YAML comes with some tricks up its sleeve too. It may be a good fit for you and your team if you’re looking for a data serialization format that:

If you need your data format to tackle nearly every situation and data type you throw at it, YAML is the answer.

Take Your IT Processes Into the Future With SnapLogic

Both data formats are robust options with plenty of advantages. And regardless of which one is right for your needs, you’ll be able to find data tools that work with both formats.

At SnapLogic, we understand that both are valuable and needed formats for handling data in different scenarios. That’s why no matter which format is right for your project, SnapLogic can handle it. Request a free demo to learn more about what you can do with your data.